In 2011, Marcus Magellan wanted to play his brand new banjitar before a live audience, so he joined with drummer/co-worker Al K Hall, and with their mutual respect for music of the past, the two airport employees formed THE SUNSHINE STOMPERS, an off beat early swing, jazz, gypsy, jump blues and fast folk duo performing covers, dixieland instrumentals, country and classic old song favorites by artists like Robert Johnson and Fats Waller.
Just for fun, Marcus Magellan's sole purpose was to busk on the streets of Coconut Grove Florida, with his unique hillbilly swing sound Marcus roused and impressed passers-by with a festive good-time bash, not just for frolic and amusement though, but to increase an appreciation for swing, Americana, old-time country and gypsy jazz while broadening a musical understanding to a curious audience.

As an unintended consequence to all his street music merrymaking, he picked up gigs at farmers markets, art gallerias and folk festivals. Inspired by hokum blues, jug bands, fast folk, gypsy and roots jazz, he eventually began to compose his own "old songs" and now write, record, and perform original music that remind listeners of music by Pokey Lafarge, Woody Pines, Two Man Gentlemen Band and Tuba Skinny.

The 1920's and 30's were eras of flappers, gangsters, prohibition and traditional jazz, then came the danceable big band styles of the 1930's and 40's with band leaders such as Louis Armstrong, Cab Calloway, Benny Goodman, and Glenn Miller.

This is what Marcus says about his music; "I write and produce hook-heavy rags played on my banjitar, I record most of these original songs myself in my home  studio. For me It's all about a good song, I just want to make good, fun, uplifting music".
SHORT BIO

Marcus Magellan has been playing music since he was nine years old. Although Marcus came to the United States at the age of two, he originated from the land of music itself, Brazil. Exposed to all kinds of music and played guitar for many bands, Marcus brings years of playing experience and wide musical influence to his interpretation of early jazz and swing.
Caught somewhere between jazz swing and upbeat folk, his instrumentals and vocals evoke the early days of American swing music, with a style all his own, his only accompaniment is his six string banjo and guitar. 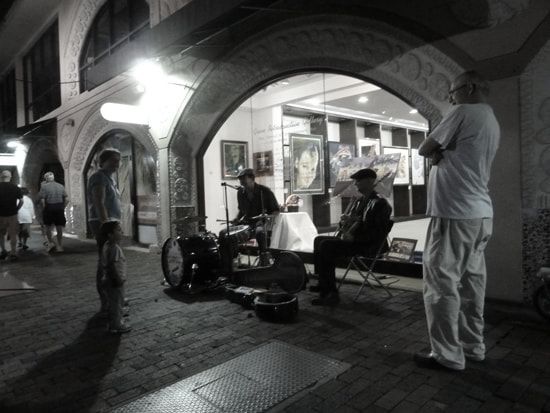